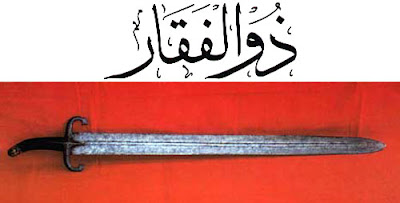 Dhu al-Faqar
Dhu al-Faqar is the name of this sword, taken as booty by the prophet Muhammad at the Battle of Badr. It is reported that the prophet Muhammad gave the sword to Ali b. Abi Talib, and that Ali returned from the Battle of Uhud covered with blood from his hands to his shoulders, having Dhu al-Faqar with him. Many sources report that this sword remained with Ali b. Abi Talib and his family, and that the sword had two points, perhaps represented here by the two lines ingraved on the blade. 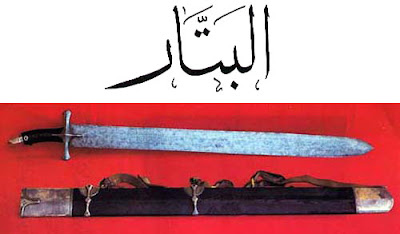 al-Battar
The al-Battar sword was taken by the prophet Muhammad as booty from the Banu Qaynaqa. It is called the "sword of the prophets" and is inscribed in Arabic with the names of David, Solomon, Moses, Aaron, Joshua, Zechariah, John, Jesus, and Muhammad. It also has a drawing of King David when cut off the head of Goliath to whom this sword had belonged originally. The sword also features an inscription which has been identified as Nabataean writing. The blade of the sword is 101 cm in length. It is preserved in the Topkapi Museum, Istanbul. Some report that it is this sword that Jesus will use when he returns to Earth to defeat the anti-Christ Dajjal. 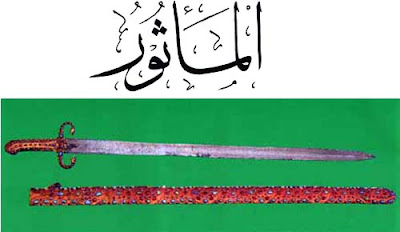 al-Ma'thur
al-Ma'thur, also known as "Ma'thur al-Fijar" is the sword which was owned by the prophet Muhammad before he received his first revelations in Mecca. It was willed to him by his father. The prophet Muhammad migrated with the sword from Mecca to Medina, and the sword remained with him until it was transferred, along with other war equipment, to Ali b. Abi Talib. The blade is 99 cm in length. The handle is of gold in the shape of two serpents, and is encrusted with emeralds and turquoise. Near the handle is a Kufic inscription saying: 'Abdallah b. 'Abd al-Muttalib. Today the sword is housed in the Topkapi Museum, Istanbul.

al-Rasub
The al-Rasub sword is one of the nine swords of the prophet Muhammad. It is said that the weapons of the house of the prophet Muhammad were kept among his family just like the Ark was kept with the Israelites. The sword is preserved in the Topkapi museum, Istanbul. Its blade is 140 cm in length. It has gold circles on which are inscribed the name of Ja'far al-Sadiq. 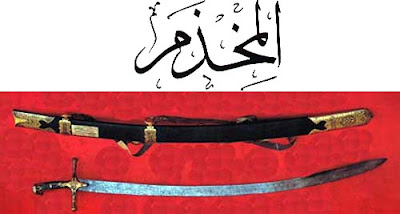 al-Mikhdham
The sword called is reported to have passed from the prophet Muhammad to Ali b. Abi Talib, and from him to his sons. Some report that the sword was taken as booty by Ali b. Abi Talib from a raid he led in Syria. The sword is now in the Topkpoki Museum, Istanbul. The blade is 97 cm in length and is inscribed with the name of Zayn al-Din al-Abidin. 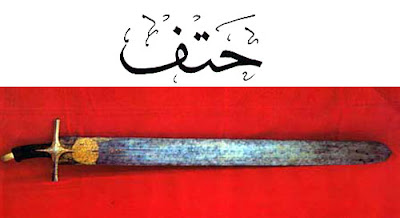 Hatf
Hatf is a sword which the prophet Muhammad took as booty from the Banu Qaynaqa. It is said that King David took his sword "al-Battar" from Goliath as booty when he defeated him, but he was less than 20 years old. God gave King David the ability to work with iron, to make armor and weapons and instruments of war, and he made for himself a sword. It was thus that the Hatf sword came about, resembling the al-Battar but larger than it. He used this sword and it was passed onto the tribe of Levites who kept the weapons of the Israelites until it passed into the hands of the prophet Muhammad. Today this sword is housed in the Topkapi museum. The blade is 112 cm in length and has a width of 8 cm. 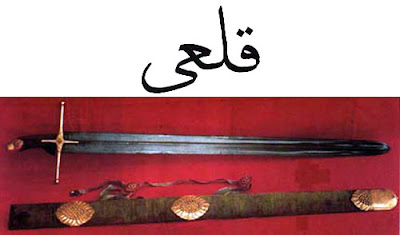 Qal'i
This sword is known as "Qal'i" or "Qul'ay." The name may be related to a place in Syria or a place in India near China. Other scholars state that the adjective "qal'i" refers to "tin" or "white lead" which was mined in different locations. This sword is one of the three swords which the prophet Muhammad acquired as booty from the Banu Qaynaqa. It is also reported that the grandfather of the prophet Muhammad discovered "swords of Qal'i" when he uncovered the Well of Zamzam in Mecca. Today the sword is preserved in the Topkapi Museum, Istanbul. Its blade is 100 cm in length. Inscribed in Arabic on its blade above the handle is: "This is the noble sword of the house of Muhammad the prophet, the apostle of God." The blade of this sword is distinguished from the other swords because of its wave-like design. 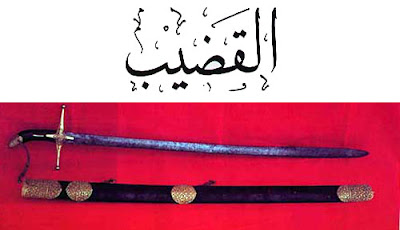 al-Qadib
al-Qadib is a thin-bladed sword which, it was said, resembled a rod. It was a sword of defense or companionship for the traveller but not used to battle. Written on the side of the sword in silver is the inscription: "There is no god but God, Muhammad the apostle of God--Muhammad b. Abdallah b. Abd al-Muttalib." There is no indication in any historical source that this sword was used or in any battle. It stayed in the house of the prophet Muhammad and was only used later by the Fatimid caliphs. The sword is 100 cm in length and has a scabbard of dyed animal hide. Today the sword is housed in the Topkapi Museum, Istanbul.

al-'Adb
al-'Adb, the name of this sword, means "cutting" or "sharp." This sword was sent to the prophet Muhammad by one of his companions just before the Battle of Badr. He used this sword at the Battle of Uhud and his followers used it to demonstrate their fealty to him. The sword today is in the Husain mosque in Cairo, Egypt.
The above Photos taken by Muhammad Hasan Muhammad al-Tihami, Suyuf wa al-Apostles' uddah harbi-hi (Cairo: Hijr, 1312/1992).
Posted by Kai Serizawa at 21:49 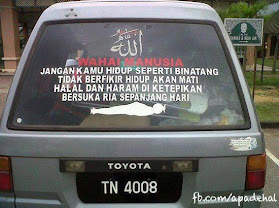